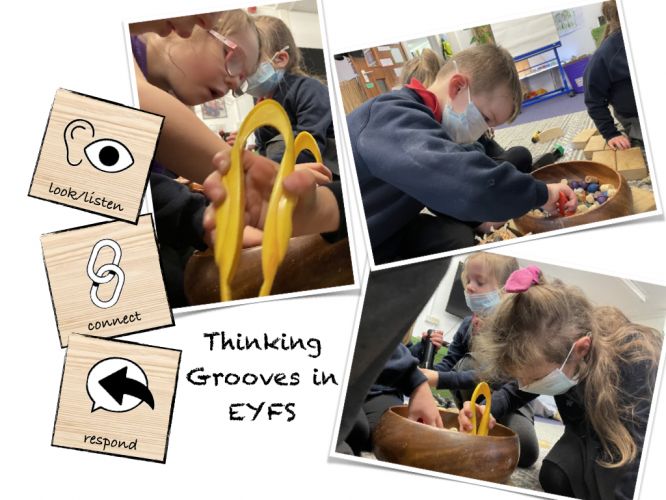 You may or may not have heard your child talking about learning their "Thinking Moves" at school. For those of you who have heard the phrase but not known much about it, "Thinking Moves" is a special series of words and phrases that help us to talk effectively about what steps we need to take to overcome a problem. There are lots of posh phrases that are used to talk about this, such as "metacognition" or "cognitive task analysis", but all it really means is "talk about how you are thinking". There's a lot of research that's been conducted into the use of these conversations about Thinking. And studies show it's one of the best ways to improve children's ability to retain learning, develop problem-solving skills and build their confidence to have a go at tasks independently. So naturally, it's something we do a lot of at Willaston.

In Reception we have spent lots of time learning the language for our A-Z of Thinking Words (These are the Thinking Moves) and we're now starting to talk about times where we use a sequence of Thinking Moves (This is a Thinking Groove, and they are pretty groovy!). Over the last few weeks we have been working on the Groove; look/listen > connect > respond. We started this with our shared speaking and idea-building activities that I wrote about last week and we are now noticing it becoming a regular part of our classroom routines.

Today I got the chance to be part of a wonderful sequence of play in my classroom that I wanted to share with all of you. An idea that started off so simple, but evolved through a number of different children listening to each other, connecting their thoughts/ideas to what they had heard, and responding to the group to share their thoughts. It all started in our construction area, where we had lots of lovely toy animals as part of our animal safari topic, and Holly and Isaac were working together to build a Zoo. They were making enclosures for the different types of animals and grouping the animals into the enclosures together. Once they had made their zoo they were very proud of it and wanted to show me what they had made. I too was very impressed and asked them what we could do next. At this point, Ava (who had been looking/listening to our conversation) came over and said "I have an idea, what if the Giraffe tries to escape", we agreed this was a fun idea and Ava picked up the giraffe toy, giving it a voice and pretending to escape with it. I picked up a person toy and said "oh Mrs. Giraffe, why are you trying to escape?" to which Ava responded "because I'm hungry", at this point Aoife grabbed another person toy and a toy tree and pretended to carry it over saying "Mrs Giraffe! Don't run away, look! I've brought your favourite food!". By this point I was already over the moon with the levels of listening and connected responding the children were demonstrating, but it was about to get even better!

Oliver, having been listening for a while, picked up the Elephant and said "Look! Now the Elephant's running away! But he fell over!", suddenly we had quite a group of children joining the game and I struggled to keep up with who's ideas were who's, but someone decided that we need to call the vet to check that the Elephant was ok. After a long line of poorly animals needing veterinary attention had formed, we all agreed we needed to build a waiting room for all the poorly animals and a vets office. A small piece of a rainbow and a torch soon became an X-ray machine as a lot of the animals had sore legs, arms and tails so we felt x-rays were a good way of testing them. We also administered a lot of animal medicine, bandages and plaster, but the X-ray machine was definitely the star of the vet's office. So we collected some black paper and some chalk and started to draw some x-rays of the animals that had been hurt. Then, suddenly there was a cry for help! "Everyone! This giraffe's eaten a poisoned apple and he's going to die!!!" while Holly frantically waved an x-ray that very clearly showed a red apple inside the giraffe's tummy!

So we rushed to action, quickly realising that in order to save this poor giraffe we were going to need to build a new space, an animal surgery room! We started by making a bed for the animals out of wooden blocks, then I remembered I still had a box of facemasks from back when we all had boxes of facemasks so we grabbed those for the surgeons to wear, and we pulled out our tweezers and bowl of treasures from a maths lesson that we did last Friday and decided this bowl was a perfect giraffe's stomach, and that all the red treasures were definitely pieces of poisoned apple! So we all worked together to carefully remove the poisoned apple from the Giraffe's tummy. I am very pleased to announce that the surgery was a roaring success and that the giraffe has since made a full recovery. But, as is always the case, as soon as the Giraffe was discharged, a Zebra came in that had a green bug in it's tummy! And our surgeons were busy once again.

All of this creativity, joy, fascination, collaboration and storytelling, all born from the simple skill of listening to each other and responding in a way that connects our ideas to the ones that are being shared by others. Real life learning and hopefully, learning in a way that will be memorable for years to come and will help our youngest learners realise just how amazingly special their brains are. 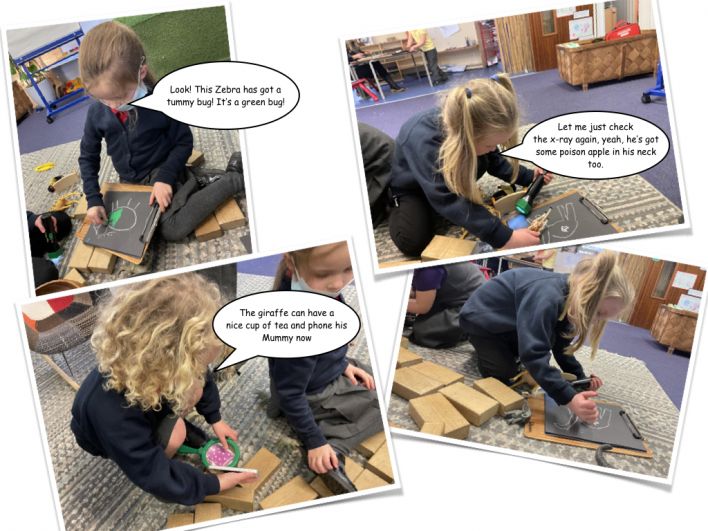